On DailyKos, a site which I frequent, has a feature called Diary Rescue, selects essays which might otherwise not attract the attention they deserve for resuscitation. This blog entry expands that redemptive effort, for the sake of this essay, which outlines the work of pioneering educator Linda Darling-Hammond.

This is a model for us all.

Especially me, some might add.  As one who teaches ESL and is a freelance ‘enrichment’ coach for learners from fourth grade through post-doctoral, I commend this diarist for two main reasons.  Number one is the specificity and organization of the information here.  Number two is the ‘reality-based’ policies that both Darling and the diarist recommend.

On the other hand,  some background is necessary to an accurate understanding of such complex matters as U.S. education policy.  Since before Horace Mann’s critique in favor of industrial education, and Dewey’s experiments, conjoining body and soul so to speak, our nation has gone through many an intellectual turn about education and schooling. 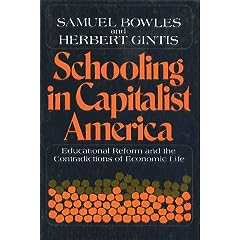 Arguably, however, for the most part only a few of the more ‘radical’ critiques, such as the ’70’s classic, Schooling in Capitalist America, have sought to explicate the roots of the problem as a conjunction of socio-economic analysis of actual schools and communities, on the one hand, with the political economic goals and objectives of power elites, on the other hand.  Such investigations have to be apt, in the context of contending that we want to improve both learning results and general empowerment.